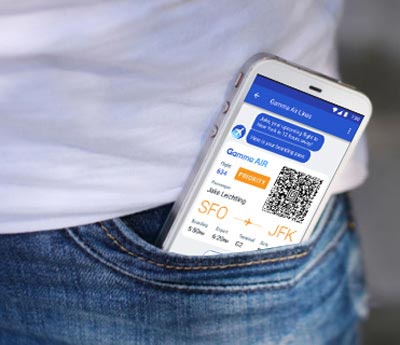 When it comes to texting, most people follow the same thought process: “If it ain’t broke, don’t fix it.” Of course, there is nothing necessarily “wrong” with texting technology today. Instead, short message service (SMS) is simply… old. Besides the limited use of emojis and gifs, there have not been significant technological renovations to the technology since the ’90s. Though most people accept texting as-is – evidenced by the 9.3 trillion texts sent annually in the U.S. alone – the need for technological advancements is overdue. Move over, SMS. Rich Communication Services (RCS) is a new era.

What is RCS Messaging?

RCS protocol – commonly known as “Chat” – is a successor of SMS technology. This modern rendition of texting is essentially a compilation of features characteristic of iMessage, Facebook Messenger, and WhatsApp. It allows for more in-depth, expressive, and interactive communication between participating devices. Chat improves the annoyance of compressed video and image files, lack of read receipts, and incompatible group chats, and other texting inconveniences, putting those conveniences all into a single platform.

This tech saw the beginning of its development by a group of industry promoters in 2007. The trade group, GSM Association, took ownership of this free texting tech in 2008. However, there would be no signs of its integration in the industry for almost another decade. It was only in 2018 that Google executives announced that RCS would be adopted into carrier networks worldwide.

Now, those efforts have been manifested in the form of Chat. Note that Chat is not an app, but a protocol, based on the RCS Universal Profile. It allows for communication between all cell phone owners, regardless of device, carrier, or country. Eventually, though, it will be available on both Samsung Messages and Android messaging.

How to Get Chat

Getting Chat on your device is extremely simple. You can integrate it into your texting in just three steps:

Don’t get too worried about whether your carrier will support RCS or not. All major U.S. carriers have expressed their support for the widespread implementation of the protocol, overcoming the hesitation that many manufacturers faced upon its introduction. Both Google and Microsoft support the protocol in a pool of 60 total supporters, including OEM manufacturers, carriers, and Mobile OS providers. You will have an incredibly easy time of getting Chat on your device.

Of the major U.S. carriers supporting Chat, there are:

Gone are the days when you have to count your characters in your texts, wondering where to end one message and begin a new one. Now, you can have the same ease of communication across devices, no matter who you’re texting.

Looking for a sender's IP? Did you get anonymous SMS and you would like to track the sender? Would you like to see ALL text messages records - including filtered ones?
SMS Activity Report - click here
Copyright Globfone ® 2020 | All Rights Reserved Videotelephony | Free call | Free text | File sharing
We use cookies on our website. Continue browsing to accept or see our Privacy Policy for more information about how we use the cookies and how to manage them at any time using your browser settings. I understood